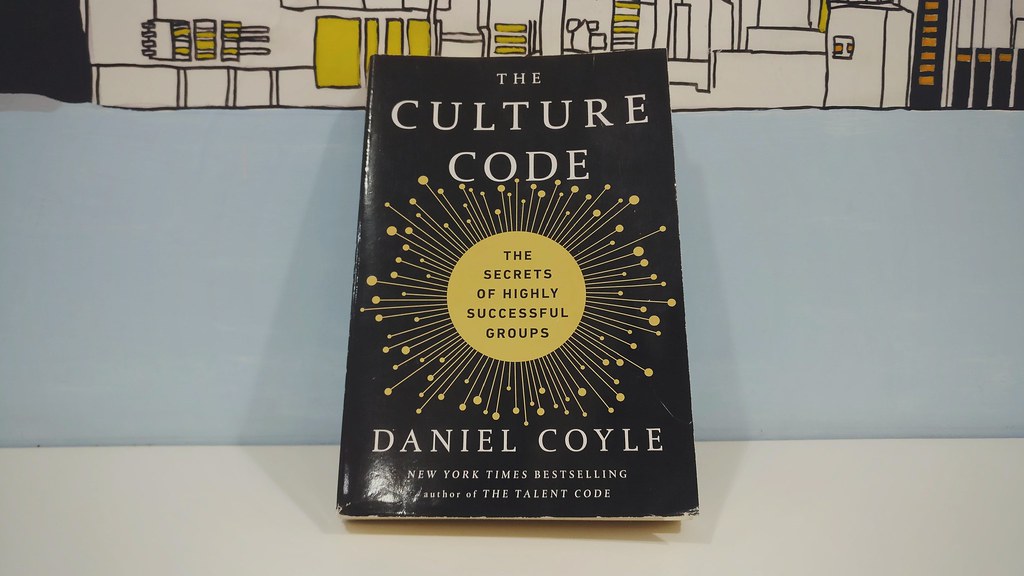 I remember I watched this TED talk by Margaret Heffernan about experiment around chicken flock. The researcher compare 2 chicken flocks and found out that the most productive flock is not the one which consist of superior breed, but rather those who are just selected randomly. But why? Turns out, good team has less thing to do with skill, but more about the social cohesion between the team member. Now the book that I just read address the reason behind the same question from a culture perspective.

I was introduced to this book after a colleage, Emma Irwin, ask in our team channel if anyone wanted to read this book along with her. Emma is driving the Diversity & Inclusion work in Mozilla. And if you happened to be lucky and have worked with her in the past, you won’t find it hard why I follow her recommendation blindly. I couldn’t be more thankful for her because this book is super resourceful.

The culture code by Daniel Coyle is trying to address the old question of Why do certain groups add up to be greater than the sum of their parts, while others add up to be less?. People might think that we need to hire the best people to make the best team. But just like the chicken flock experiment, this book will answer why hire the best people is not enough. We need to create the right culture for the team to be more successful.

The author spent 4 years visiting and researching 8 of the world’s most successful groups and found out that their cultures created by some specific set of skills. Those 3 skill sets, including:

Culture from the Latin cultus, which means care.

But if I can summarize the message of this book, that would be that we need to care about people in our team. As you can see, the first 2 points are mostly focus on individuals, and only on the third point, the broader goal of the team is included. Because as Heffernan points out: “Companies don’t have ideas. Only people do.”

By the end of the first chapter, the author mention some ideas to build safety in our team. Here are some of them:

This section explain how habits of mutual risk drive trusting cooperation. But being vulnerable is hard because it requires people to expose their pain & weakneses. For that, the author tell a story about United Airline flight 232 crash. During the flight, there was a loud explosion from the plane’s tail. In such an emergency situation, a passanger named Denny Fitch, who turned out to be a pilot trainer told a flight attendant of his willingness to help the cocpit crew. While in the cockpit, Fitch begin with a simple question “Tell me what you want and I’ll help you”.

The question, inspire the captain to open up and share his vulnerability. In the end, they managed to land the plan with 185 of 296 passengers survived. The investigator tried to replicate the flight 232 condition in a simulator as part of the investigation for 28 times, but the plane end up crashed every single time. Now we see how vulnerability is needed because it tends to spark cooperation and trust.

Some are concrete ideas for team to embrace vulnerability from the book:

This is where the fundamental of the team lies. To create bond inside the team, we need to have narratives around shared goals & values of our team. In my current team (Open Innovation), the term Open by design is repeated over and over again. This may sounds cheesy, but it’s important to amplify this phrase to remind the team member of what we’re going.

And as usual, the author also mention some actionable ideas to establish purpose inside the team, including: